The EARL Project, our main activity, is aimed at re-usable access to sub-orbital and orbital space. For sub-orbital access a single aerodynamic, rocket-propelled automatically-guided vehicle would be used. Payloads would be taken to sub-orbital space and ejected, or kept within the hull and returned to a horizontal landing at the take-off site. The addition of two similarly-shaped, but non-payload carrying hulls to boost the payload-carrier into an orbit is also possible. In this way, we shall have achieved a fully-re-usable orbital access system. With repeated use, the operating costs will fall to those of propellant and maintenance - a fraction of what it now costs to launch payloads with a one-use launcher. 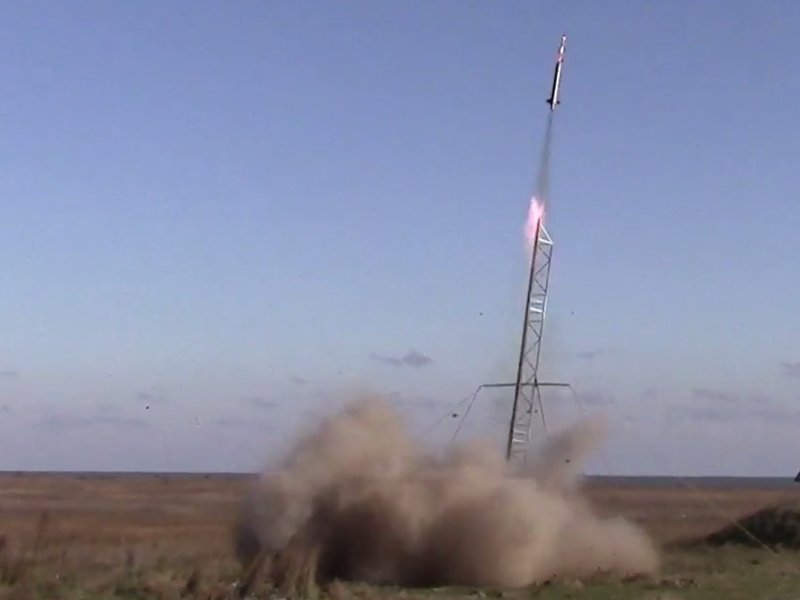 The space dart combination consists of a booster that imparts a powerful acceleration, for a short length of time, only a few seconds, to an un-powered javelin-like "dart" which is, in effect, thrown upwards, as it separates from the booster. The dart is, typically, a 4 cm in diameter, large enough to carry an electronics package and batteries.

On this first launch there was an experimental package for radiation detection, but no signal was received from it. We are confident, however, the the dart would have risen to around 25 km altitude, as expected.

We are now collaborating with the SunRide amateur rocketry society of the University of Sheffield in the UK, and, this year, we expect to be sending two darts, carrying SunRide electronics and instrumention to heights of 50 km, for the first test flight, and then to just over 100 km altitude in the second test flight. Measurements of temperature and pressure will br sent to the ground by radio telemetry, together with pictures from a high frame-rate camera. Launches will take place at a landward range, and we intend that a parchute will be fitted to the darts, and will bing them down intact, within the range.

The Space Dart is an exceptionally cheap way of putting objects into sub-orbital space. There may be more missions for it to perform, after this year.