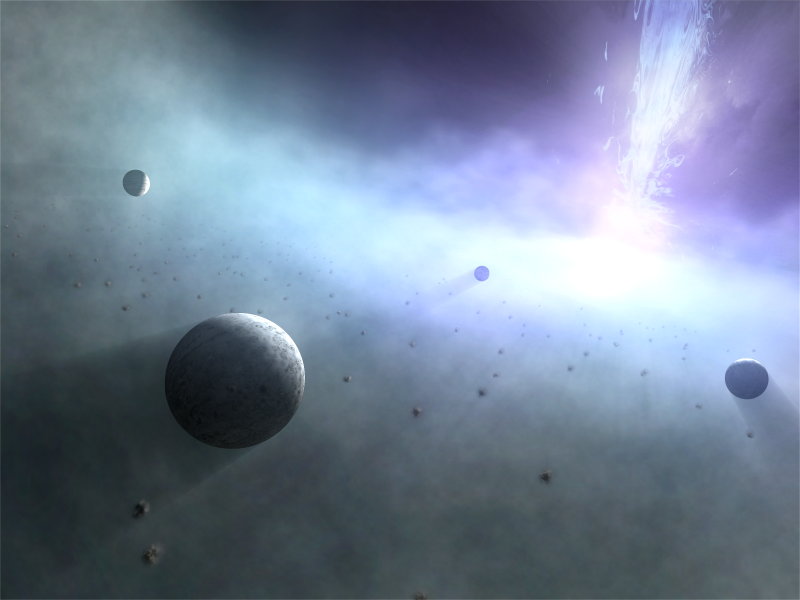 Up untill now we have never thought that Black Holes might have planets in orbit, except for a few science fiction stories. It just goes to show that science fiction writers can be visionaries. Now, Professor Keiichi Wada of Kagoshima University, Japan, says: “With the right conditions, planets could be formed even in harsh environments, such as around a black hole,” This suggestion emerged from his work in active galactic nuclei, which are highly luminous objects energized by supermassive black holes.

Black holes, by their extensive and strong gravitational field, would be able to gather around themselves considerable volumes of dust and gas. In regions where the intense radiation from close to the black holes' absolute event horizon, is attenuated by the depth of orbiting dust clouds, theoretic studies indicate that planets can form.

The sheer quantity of material that a supermassive black hole could gather, as compared with far less massive stars, coupled with the much larger volume of space subjected to the black holes gravitational field, means that many more planets than might be found in a typical stellar system could be formed.

“Our calculations show that tens of thousands of planets with 10 times the mass of the Earth could be formed around 10 light-years from a black hole,” says Eiichiro Kokubo, a professor at the National Astronomical Observatory of Japan who studies planet formation. “Around black holes there might exist planetary systems of astonishing scale."

At present, there do not seem to be any observational techniques that would make such planetary systems visible. Our own galaxy contains a black hole, so far as can be determined, and it is known to have close stellar companions whirling about it. Viewing planet-sized objects at 30,000 light years distance would require resolving powers unattainable by Earth-based telescopes.