UK company Reaction Engines has tested its innovative precooler at airflow temperature conditions equivalent to Mach 5, or five times the speed of sound. This achievement marks a significant milestone in its ESA-supported development of the air-breathing SABRE engine, paving the way for a revolution in space access and hypersonic flight.

The precooler heat exchanger is an essential SABRE element that cools the hot airstream generated by air entering the engine intake at hypersonic speed.

“This is not only an excellent achievement in its own right but one important step closer to demonstrating the feasibility of the entire SABRE engine concept,” said Mark Ford, heading ESA’s Propulsion Engineering section.

Test facility in the USA

The Synergetic Air-Breathing Rocket Engine (SABRE) is uniquely designed to scoop up atmospheric air during the initial part of its ascent to space at up to five times the speed of sound. At about 25 km it would then switch to pure rocket mode for its final climb to orbit.

In future SABRE could serve as the basis of a reusable launch vehicle that operates like an aircraft. Because the initial flight to Mach 5 uses the atmospheric air as one propellant it would carry much less heavy liquid oxygen on board. Such a system could deliver the same payload to orbit with a vehicle half the mass of current launchers, potentially offering a large reduction in cost and a higher launch rate.

Reaction Engines constructed the precooler test item in the UK, then shipped it to its specially constructed facility at the Colorado Air and Space Port in the US for its test campaign.

This ground-based test achieved the highest temperature objective of the company’s ‘HTX’ hot heat exchanger test programme: it successfully quenched airflow temperatures in excess of 1000 °C in less than 1/20th of a second.

This most recent test builds upon the success of previous HTX hot tests undertaken in April which saw the precooler successfully operate at temperatures of 420 ᵒC – matching the thermal conditions corresponding to Mach 3.3 flight. 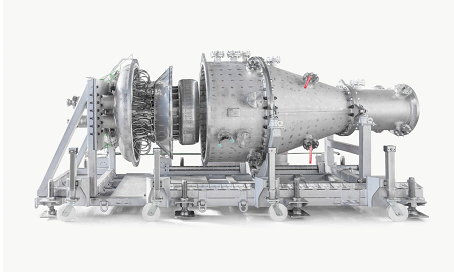 ESA, via the UK Space Agency, has invested €10 million in SABRE development, together with £50 million (€58 million) from UKSA. ESA also performs a technical oversight role on behalf of UKSA. In March, the two agencies reviewed and validated the preliminary design of the demonstrator engine core of SABRE, which Reaction Engines will use to undertake ground-based testing at its under-construction TF1 test facility at Westcott, Buckinghamshire, UK.

Reaction Engines co-founder and current Chief Technology Officer Richard Varvill emphasised that this achievement was the culmination of more than 30 years of effort: “This is a momentous landmark for Reaction Engines in the development of its SABRE engine, which has the potential to revolutionise both access to space and high-speed flight by powering aircraft to five times the speed of sound.