Why does space launch cost so much, while air flight is so cheap? Think how much it would cost you to travel on an Airbus or Boeing, etc, if the whole aircraft were to be scrapped at the end of its first flight. Only millionaires could afford tickets. That's what happens with space launchers.

The Spacefleet project is aiming to bring the cost of space launch down, by the use of completely-reusable vehicles - no stages or other parts to throw away and add to the blizzard of space junk up there in orbit. Furthermore, when, as we plan, the whole vehicle goes into orbit, we can use it to bring orbiting satellites and space junk back to the ground.

Spacefleet Ltd is a small UK company that has started this effort by developing a space-capable rocket-powered UAV, or "drone". It will be capable of taking small payloads up above the atmosphere into space. On May 5th, 2018, we tested a small-scale "boost-glide" demonstrator, the EARL-D4, which flew up to 4 km height, before gliding down to the ground, under programmed automatic control. 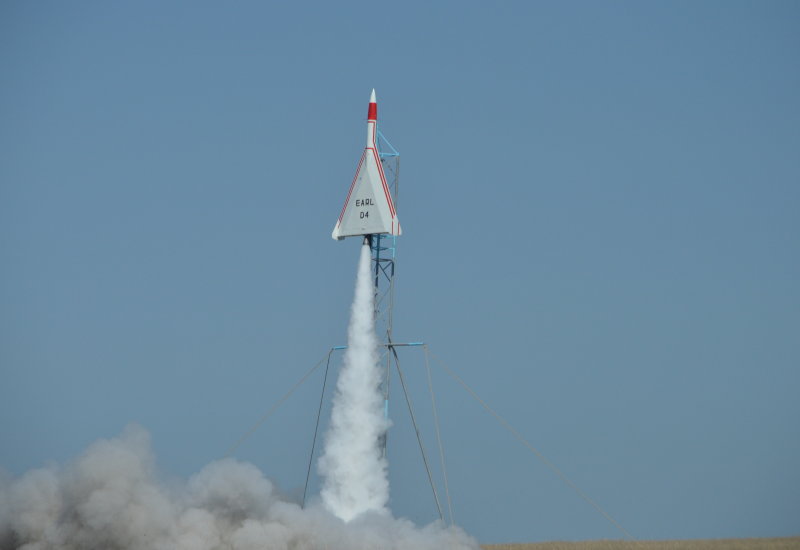 EARL-D4 taking off at a site in eastern Romania

We have also designed it to enable the attachment of winged booster hulls, arranged in "sandwich" form. Using these, the main hull could ascend to 60-75 km, nearly into space. With an increase in scale of 2-3 over the existing dimensions, we would have a functional sub-orbital space drone that could take payloads into space and bring them back to a designated landing point, which could also be the take-off location.

At the present stage of development, "can-sat"-sized  payloads could be taken to the stratosphere. When we have tested the EARL-D4 Mk II, the apogee will be around 30 km.

The EARL vehicles are designed with the addition of boosters in mind. They will be very similar hulls, but without payloads. Clamped on opposite sides of the main hull, they will boost it, until exhaustion of fuel and then execute a glide landing, leaving the main hull to continue with its mission. In this way, we expect to be able to boost the main hull up to 60-70 km - nearly into space. With a 2x or 3x scaling up of the whole system and no other changes, we will be able to reach sub-orbital space (~100 km and above).

The "sandwich" or "triamese" arrangement of main hull and booster hulls can be used to take an EARL hull into orbit, if suitably scaled up. This concept was studied and found to be valid, by the British Aircraft Corporation in the mid -1960s.

It is a workable aerodynamic alternative to the SpaceX vertical return and rocket-powered deceleration technique, and in use is much like the Space Shuttle - but fully re-usable.

then, please ask for more information: This email address is being protected from spambots. You need JavaScript enabled to view it.

Spacefleet Ltd is a UK-based company that is aiming to provide a space transport service to take users' payloads to orbital and sub-orbital space. This website is a shop window for the Spacefleet projects and sales, and it aims to grow a community of space enthusiasts. If you join up (see panel to the right), you will have access to the discussion forum, the space news archive, you will be able to submit your own articles to the "Space News" section, and you wil also have access to the crowd-funding initiative for the EARL project, when it goes live.

The very-long-term aim: To end up with an organisation that will provide space transport services on a commercial, but international basis. as the visionary writer, Arthur C Clarke once proclaimed: "We will take no frontiers into space!".

In addition we will offer, at some point this year, a crowd-funding opportunity, to enable the EARL development to continue, firstly, to complete the EARL-D4 demonstration system, then a large vehicle for commercial sub-orbital flights. If we are then able to find funding from private sources, or business grants, then  we can progress to an orbital access service.

It can be done, and you can be part of it. Please join us.

Contact: This email address is being protected from spambots. You need JavaScript enabled to view it.

Note: Unlike some space projects you may see around the web with flashy web sites but no hardware built and no actual progress, the Spacefleet projects have real hardware, for the EARL, Dart and PDRE projects. Admittedly, the Spacefleet company is, indeed, being run from a residential property in the UK, but we have an associate in Romania with a workshop dedicated to our projects. When we have enough funding we will be able to expand into business premises in the UK and elsewhere, and start employing people and building the company. Before we can do that, we have to be able to take the critical step in providing a sub-orbital launch service, which we will do.